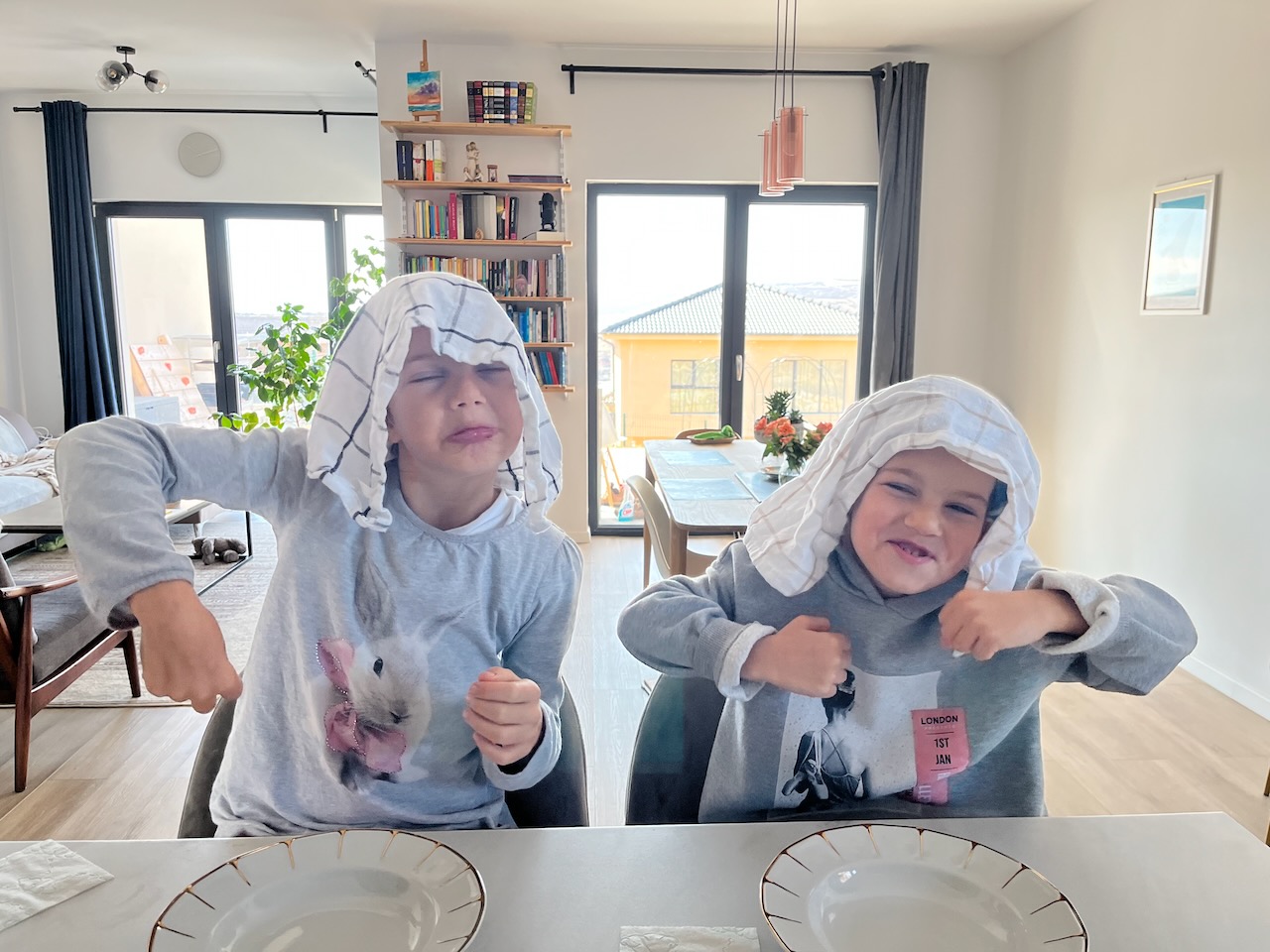 “The damage is done. Let’s see how we can fix it.”

On the receiving end, if someone with authority says that to you, instead of discussing consequences, it’s pure grace. You don’t sweep the issue under the cover. But the approach is not punitive. It’s constructive. Literally.

Last week, an adoptive parent said that his father had this approach, of focusing on the solution of the mistakes he made. And it shaped the way he does business today. It actually guided his career in this direction focused on solutions. This man is hilarious, lighthearted, driven. What a testimony to his parents and his ability to embrace that mindset.

Yesterday, after a good day at their respective schools, the girls were a little distracted, disconnected, set on experimenting around the house, making trouble.

We discovered scratches on the white walls, and stains of green play-dough. They stuffed play-dough in the glue cap, rolled it on the nice wooden table, and sat in it, with their school clothes.

After a long day, after I served them lunch and helped Jackie with her math homework, I was trying to listen to a podcast and I dozed off to wake up to ivy’s whining. I thought Jackie did something. She wasn’t even in the room. But ivy was crying because she wanted to play with Jackie, who left after ivy spit on her.

After two weeks of ivy not going to kindergarten, she come back today with all kind of novel ideas about human interaction. This year we’ve struggled to get her to spit in a cup for the bi-weekly covid test, and all of a sudden she has no problem spitting. Evidently ivy had hard time using her higher-function brain. Her eyes looked tired. But the first few tries encouraging her to rest, she said she doesn’t need to take a nap. Upon the spitting incident, I sent her to bed. She fell asleep instantly. Meanwhile, Jackie took back her domain, her desk, to play wit the dolls, without Ivy’s intervention. Upon my request, she browsed a book but not for long.

Cleaning scotch tape off of walls cleaning stains of ink, blood or play dough is not easy. Washing Jackie’s white desk every few days because it is dirty with pencil marks, sorting their rooms, cleaning their rooms… it never ends. They are on the cusp of having the dexterity to do it. Half the time I encourage them to fix their mess, or tidy up their toys, their clothes, their room. I turn a blind eye to half well done work… I am trying to survive, teach them some, clean up some. It is exhausting to realize that this job will never end.

I am trying to incorporate this phrase in my vocabulary. The damage is done. Let’s see how we can fix it.” When I’m furious (I wonder if my irritation is justified, other than the feeling of futility in trying to address the same mistakes over and over) it feels like undeserved grace. Will they learn anything if we focus on the solution? My heart says they will. I just need to take my broken punitive mindset into the light and let it dry out the stench. My parents never created consequences for me. I dealt with natural consequences, and they weren’t there to save me from them, having spent a lot of time on my own, away from their evaluative eyes. I tend to believe that we feel this exhausted, and irritated because we are together always and everything is in front of us. Making an effort to discreetly not be at the scene, and let them figure out solutions, even if they are messy most of the time. I see them grow from trying to fix stuff, even with their rudimentary skills. May we have the patience and the trust that walls can be repainted, clothes mended, toys fixed… and let them try to embrace their confidence and independence.

The damage is done. Let’s see how we can fix it. It’s a good rule for adults too.