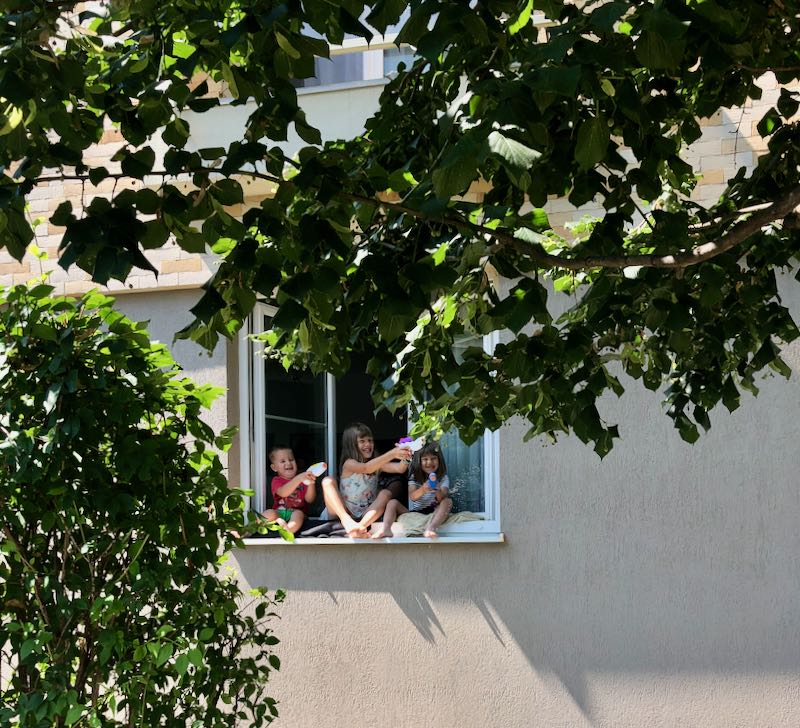 Marc came over for the morning, to spent time with the grandparents. Then he came up to our apartment of his own accord, because he’s become familiar with the toys, us and the girls.

Conrad got a call to go pick up his weekend ordered bag of coffee. And I got the call toPick up Jackie’s corset.

We told the girls. Ivy said she’s staying home with bunicu and the kids. One doesn’t throw away such an opportunity! we put shoes on and off we went. Freedoooom!

We thought we’ll finish the errands in one hour. But we stayed three hours in town. Went shopping too. It was amazing! The kids had a ton of fun. And we had some great time away from them.

As we returned, energized and happy, we were different parents. The rest of the day. The kids were playing on my parent’s windowsill shooting water guns at the trees. A beautiful sight of joy.

As we went up to our home, we were in the mood to play. Our patience was present, like an entity an old friend who had ben gone for a week or so. We felt ready to run a day marathon of patience. I think that even the girls noticed and general mood change. We skipped the nap and we hoped they’ll go to bed early (they didn’t). Ivy wanted me to stay with her to fall asleep. When I told Ivy we’re making an exception and skip nap today (It was way past nap time) she asked: “why?”. It’s the usual why, but it sounded as if she disagreed with our decision. Instead, I think she was trying to understand better the circumstances under which one dodges the nap. To maybe repeat the experience.

They didn’t fall asleep as fast as I had hoped for. And Ivy slept poorly. She woke up thirsty. She called for me from her bed. In her sleep. I went to cover her. Conrad did too. Then as she continued her restlessness I asked if she wanted to come up in our bed. After a moment of silence she said: Yes. She spent another half an hour of restlessness next to me. Then went down to her bed, Rufus curled next to her happy smile and we all slept through the night.