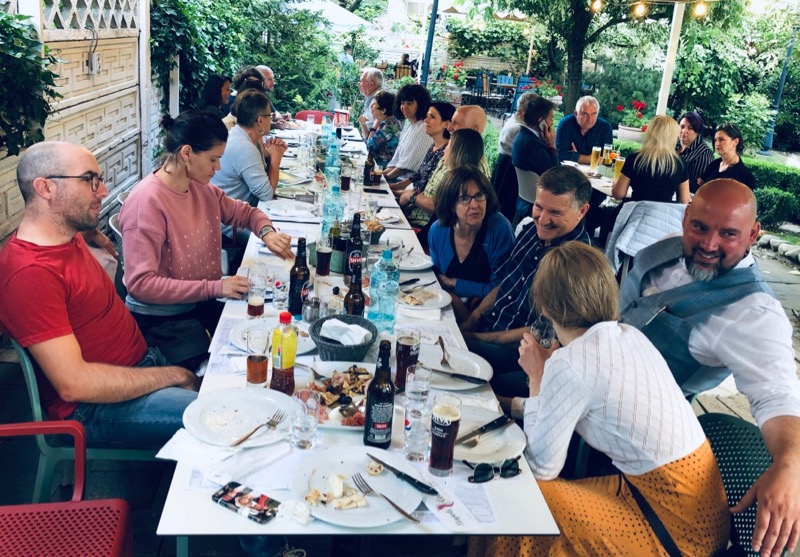 We all survived a week of flexible schedule. Nothing started or ended on time. We went with the flow. The pullbacks were gentle and could have driven some timely, organized people crazy.

It’s odd that an entire group of 40 adult didn’t bring forth at least one people to react negatively to this extraordinary lack of structure and time boundaries.

After a day of wandering aimlessly through town, stopping for ice cream, for flowers, for coffee, people chatting in groups, sharing life and stories, we waked alongside the oldest wall of the city and made it back up a steep street where we parked the car. We split without clear direction into a few groups, with the understanding that we’ll meet for dinner at Coco.

Conrad, Jackie and I headed over to the airport to bring a last traveler. We had time, so we stopped at a large grocery store to buy beer for a week in the mountains. As we were finding our way though the parking lot, a mom down on her luck, with a sleeping baby in her arms pleaded for some help. I heard her say after we passed her “at least some milk”.

Conrad went shopping for her. He said he feels uneasy getting two packs of beer for us, and dog treats, when a mother outside is desperate to feed her children. We got sausage & salami, bread, cheese & milk… As we went out she was still there, trying to sell wooden spoons with her 5 kids. We gave her the bag. We smiled and Conrad caressed the heads of the boys. Jackie was holding my hand. We smiled at her and blessed her. Her face skinny and sunburnt. Her grateful smile now burnt into my memory.

Conrad and I had quarreled during that hour. We were both peopled out, tired, and got to the bottom of some misunderstandings.

We realized that we kept dismissing each others’ input or opinion. We got gas and then struggled to park at the airport. Only there we found out that the plane had an hour delay. On top of this delay, our friend was stopped at the border suspiciously, because he had a new passport, was traveling alone and had a lot of books. He was questioned for two hours. And we were waiting, getting increasingly worried and frustrated. Jackie was hungry, having walked through town all day, playing with her friend, not taking a nap. She was though in better spirit than me.

At the end of that crazy day though, Conrad and I had a chance connect and slow down to listen to each other’s valuable input. We don’t talk just to hear our own voices.

As we were still waiting, we realized that the best thing for us both that day was the smile of the sun kissed, tired and skinny mother, in the parking lot of the large grocery store.