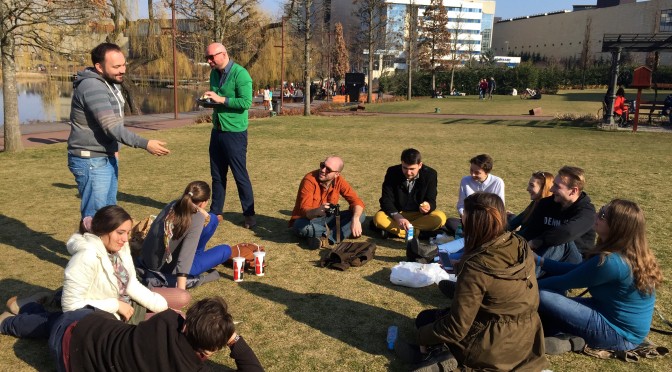 I worried that I will forget myself, that everything I learned and felt differently, if I don’t get it out as fast as I could, it would get buried. But I had to also trust my instinct. It didn’t feel right to talk over others, to impose my view, to ever start my conversations “in america we did” even though I had been tempted so many times to do so.

Have you ever had a tough conversations where you wish you had the first word, to just get it out, to not let others’ opinions influence yours? This is basically the same thing at a life scale. I was worried that I would lose myself in the desperate need for ease, comfort and acceptance. Being different is not as glamorous as it is in California, San Francisco area. I have struggled with depression these past three months. I value strength so much, that saying this right now is not easy. But it was real and I’m glad to free myself by letting it go and giving it a name.

I actively waited. I said yes to more things than I should have. I stretched my social skills beyond what I exclusively needed. I had to try lots of circles, and be uncomfortable, take a full gulp of the unfamiliar.

There are thins that I wasn’t ready to admit or to tackle… family disfunction and people telling me what and how I should do it, a nagging judgment of most of my choices, church disfunction and a perpetuating self-absorption that stiffens true growth, selflessness and awareness of the big different world beyond our small world. And a big one that we seem to be all blind to it: the “I know a guy” syndrome. And how every single Romanian that hasn’t traveled or lived outside, strongly believes that this is how things are done, and you are stupid, literally, if you know a shortcut, a backdoor, a connection, and you don’t use it. The system is sick, and maybe people don’t work efficiently, but how do you hope to ever influence change if you are faced with a path of resistance and without a second thought of trying to push ahead, you go around. We are not a brainless river… and even the river can reshape it’s riverbed with force, determination and a little help. We ought to first recognize the issue, speak up, make a plan and take action. I started giving constructive feedback left and right. Businesses, government, state employees. The funny part is that the path of feedback is so empty, I lookup a phone number, I call and they answer. I speak calmly but directly and then they follow up with me. And some things get solved faster than they did in the states.

So I stopped and listened. And I realize that instead of loosing my voice or myself, I still believe! And it is very possible that my two cents are even more relevant now than they would have been if I had thrown them at any give issue before consideration, just as we arrived.