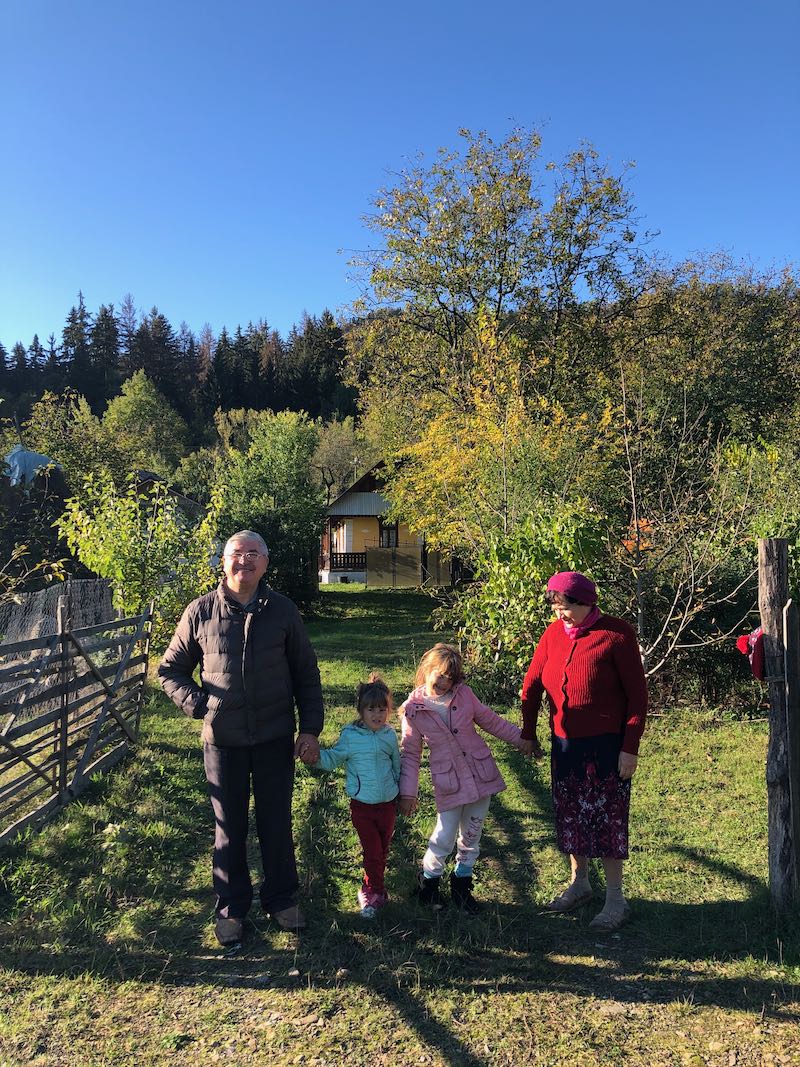 At the beginning of this year we bought an orchard. I signed the papers on the last day before the lockdown started. Those two months of cleaning dry shrubbery and tending to the garden were a heavenly gift. I would have paid someone to let me work outside. The money we invested seemed like a most enjoyable prepaid therapy for our minds during the first months of pandemic.

Fast forward to Fall. The trees, though we tended to them to the best of our knowledge, they gave forth abundant fruit. Hundreds of kg of apples and plum. We made jams and jellies. We have away bags of apples and plums. We sold jars of jam. And because we couldn’t let the fruit to rot on the ground, with my parents we piked the last of the crop yesterday evening. 10 sacks of apples. The car was such low rider during the drive. We drove them an hour into the mountains to a family farm that juices them and we’ll get our juice on Saturday.

Yesterday, as I was picking fervently, the girls got bored and started annoying the adults with requests, demands, attention and pocking each other. My mom asked them to help. But they didn’t want to. As they stated demanding our attention again, mama called them out on it. They were seriously displeased.

The girls got bored again. The irritating part was that they complained. You know, if you want to get away with being lazy, you don’t sit around to be seen. You make yourself scarce. You disappear from people’s way.

I remembered a bible verse though, from Tess. 3:10. He who does not want to work, shall not eat. I thought is was a farm saying, but it’s actually in the Bible. I said to matter of factly to the girls. Ivy remembered food and started saying that she’s hungry. Jackie said she doesn’t care. She won’t eat. She’s not hungry anyway. I kept picking and said she won’t feel the same tonight at dinner time. Jackie got up and came to help. Honestly, it’s not that hard for a kid to pick apples from the ground and put them in a bag. She realized it too, and started helping in earnest. Then ivy came. She had a very specific idea of how she wanted to help. She wanted to be given the apples and she will walk them to the sack. We played for a while as if we were the dwarfs who were gathering precious stones. They picked up a who sack with help from me. But their boost of self confidence and exercise were evident and so satisfying. There was a lot of bickering, a lot of encouraging to stay focused, a lot of work. Such is life.

Jackie has been doing dishes every day. Slowly and carefully. she won’t win any speed contest in dish washing. But she is eager to contribute. I bite my tongue when she wastes too much water. She is trying to learn and practice. And frankly, I have long reached my energy limit. The whole family is trying to catch up and be efficient and considerate. And I take it with a grateful heart. We all learn.