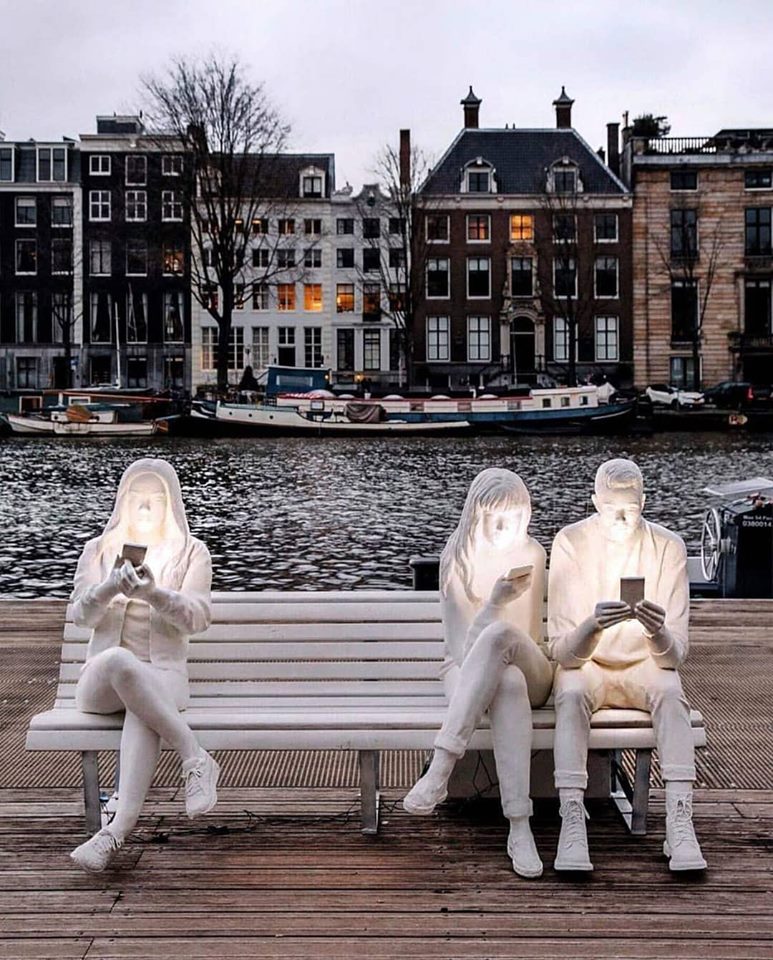 That awkwardness when someone pulls out their phone and you sit like a dumb next to them. Resisting.

A decade and a half ago I was that person. An introvert. I had bought an iPod nano after my summer in Silicon Valley, and as I came back to college, I would listen to music a lot. I didn’t even know there was something to resist to. I was the odd one out and I liked it.

Today we succumb to fitting in, to not feel like an outsider, not not look like a fool or a creep, looking up and around when everyone is engaged in their glowing screens.

Backtracking farther. As a teenager I discovered I could get quite addicted to television. But my grandma didn’t have a tv at her house in the mountains. It was grandiose, and free, and nature filled time. Then at 15 I asked my parents to take away the tv. I watched movies occasionally, but I didn’t want it anymore. Its absence has shaped who I am. I have vivid beautiful memories of drawing, writing, studying, listening to music, daydreaming. It is then I started to read hefty books with delight.

Conrad loves to read. One of the first questions his mom asked me was “what kind of books do you like to read.” My heart skipped a beat with delight. This new family of mine reads for pleasure!

My conversations with Conrad and his family can be riveting even after 12 years of marriage. Because we expand our minds beyond the mundane. Reading.

Conrad would tell you he is a very focused kind of person. It’s great and dangerous at the same time. He can obsess, in a productive way or in a depleting way, about a variety of subjects. Design, flowers, hiking, and early on: video games. The latter has caused us some grief during stressful times. And we’ve kept each other accountable. It was not pretty, it was not easy. During stressful times I would loose myself in social media. I would checkout, (smombie= smart phone zombie) but I wouldn’t really rest.

The way to recognize the damaging effects of addiction is a quick assessment of how you feel when you end that activity. Depleted or energized?

So we’ve devised plans. To remain present and in control of ourselves. We actually addressed it like an addiction, Conrad’s video games and my social media.

We made plans. We slipped. We called each other out. We felt ashamed, frustrated, angry. We felt hopeless and it wasn’t even that bad. But our selfishness and irritability were brought to light due to our imbalanced iPhone use.

We made a few simple rules we both agreed to abide by:

Jackie joined us at age three. She had one addiction: cartoons at her discretion. And no early bedtime.

She adapted easily to us. We made the rules simple and clear. And we adapted to her needs of predictable routine, reading to her lots, playing beyond our limits of energy (stretching a bit more each day), re-learning games, talking and listening way more than we were used to. Laughing more. Delighting in the present more.

She wanted my phone to listen to kids songs on YouTube. We showed her ONE song when we visited her at the foster family: “Văcuța Lola”. The gateway. She wouldn’t want to stop there. More, more, more! So we stopped bringing out the iPhone all together. No phone. For months! Not in her presence. Except to snap pictures here and there. She did not see us on our devices at all. Later we instinctively explained to her if we needed to work (track shipments, answer emails, pay bills) then we put it away. That was the best we can do to set a good example. And it worked.

Later on at home we had clear time and game limits on the iPad for her. I didn’t think a complete deprivation, and thus obliviousness, of technology is the solution.

We will adapt as I know we will hit other milestones and needs and desires and social pressure. We don’t know what we don’t know but we have instincts and no shame in standing alone.

Her presence in our home has been a positive influence for a healthy lifestyle: food and technology, rest and reading. We just needed to open our eyes and be willing to adapt. We all have the capacity to be quite selfish. But we learn to serve and sacrifice; at this stage we have the ability to fully influence what she is exposed to and give her a healthy foundation for a wide vocabulary through extensive joyful reading, for empathy, for spirituality, and a thirst for knowledge, for appreciation of the wide world through traveling, befriending diverse people and exploring.

Everywhere we go, we meet younger and younger kids addicted to their devices, smart phones and tablets. And parents who are too tired and too confused to set and stick to rules. I’ve been tempted to give in and not let Jackie be the one odd out; but then again, standing alone is powerful. If we help her understand why and how.

We can’t change the world on this matter. But by changing ourselves we influence our immediate family, each other and our daughter. And for now, Jackie is quite a powerful & vocal advocate about technology overuse. She is that little girl in Ohrid. Thanks to her dear friend Friedrich who had ears to listen to her.