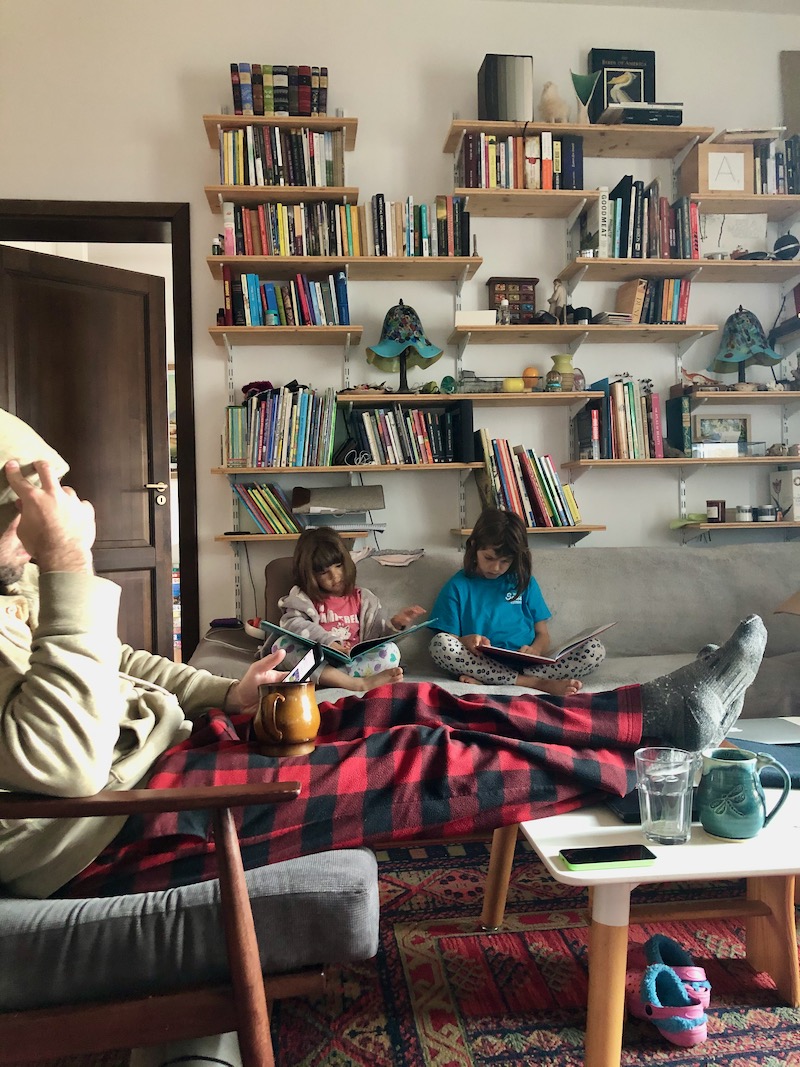 It was a cold Saturday. The air smelled like snow, through it is already April. At 1 PM we were scheduled to get our first dose of the vaccine. And at the same exact time we got a notification from Ikea that they are delivering some stuff, straight from Bucuresti. As luck would have it, the delivery guy called in the morning to say that he is on his way at noon. I tried to tell him we are scheduled for 30 minutes elsewhere at 1 PM but he talked over me with annoyance. Probably he drove all night and his customer service skills were numbed with tiredness.

We hoped we would accept de delivery in time and run to the nearby medical center which was only 5 minutes away. As we were waiting in the car, in front of our building, at the time we were supposed to be at the hospital (we both like to be on time), the delivery guy called to get further directions because he was lost. He went to the wrong Terra neighborhood. He was on the other side of town. Conrad made a split second decision, put the car in gear and we went straight to the hospital, and managed to get the vaccine before he arrived to deliver the ikea order.

We were told about the likely side effects of the vaccine. We’re both pretty strong and resistant and in good shape. 8 hours after the short we started feeling the aches and pains. And conrad started shivering uncontrollably. It was a rough night. And the next day was even worse. We were both in pain and drowsy. The girls sensed our low energy and were quiet and self-sufficient to the best of their age appropriate ability. The headache was debilitating and I wondered if this was such a great idea after all. I listed to church with my eyes closed. Conrad took a bath. We fed the girls and we watched Ratatouille together. Then both girls took naps. It was a drowsy day all around.

The physical pain forced me to refocus. My stress related to the house subsided. It put things into perspective. There are a lot of things I don’t like how they are (not) progressing. But I did not want to micromanage the team. I got the sense and message that I don’t have to. It turns out in some areas I should have. But how do you know which areas, when you don’t know the teams. And the fact that we had three different teams working on our very small bathrooms, putting tiles, taking them down, waiting two months and putting them up again, less than perfect… Then they cut around the wall socket imperfectly, and today they have to come and break the times to retile … this is the type of thing I wanted to avoid hiring a large, expensive team, with experts in multiple areas. “If I could go back in time…”  has been my plague this winter/spring. God give me the wisdom of the end days.

There is such a delicate ballance between speaking up timely and giving space and not micromanaging. It’s been three months of interior finishes. And all the work could have been done in one month. The fact that you pay a lot of money doesn’t make a huge difference in the outcome. It only gives you the false impression of priority and quality.

I hope we don’t need to re-do too much of the work. I dislike backtracking. And it feels that they have overstayed their welcome in my space. And that space does not feel relaxing to me.

As I was saying, the aches and pains helped me reset. But it is all too easy to slip back into stress and frustration related to the house. Conrad has a wise word, to not dwell on what could have been and what we should have done. But frankly, I’m on my edge of patience with the work that keeps prolonging and needs to be redone. And I must speak up clearly and timely and leave the balls in their court.

More snow is predicted and below freezing temperatures. I hope we’ll emerge alive and well out of this very long winter.