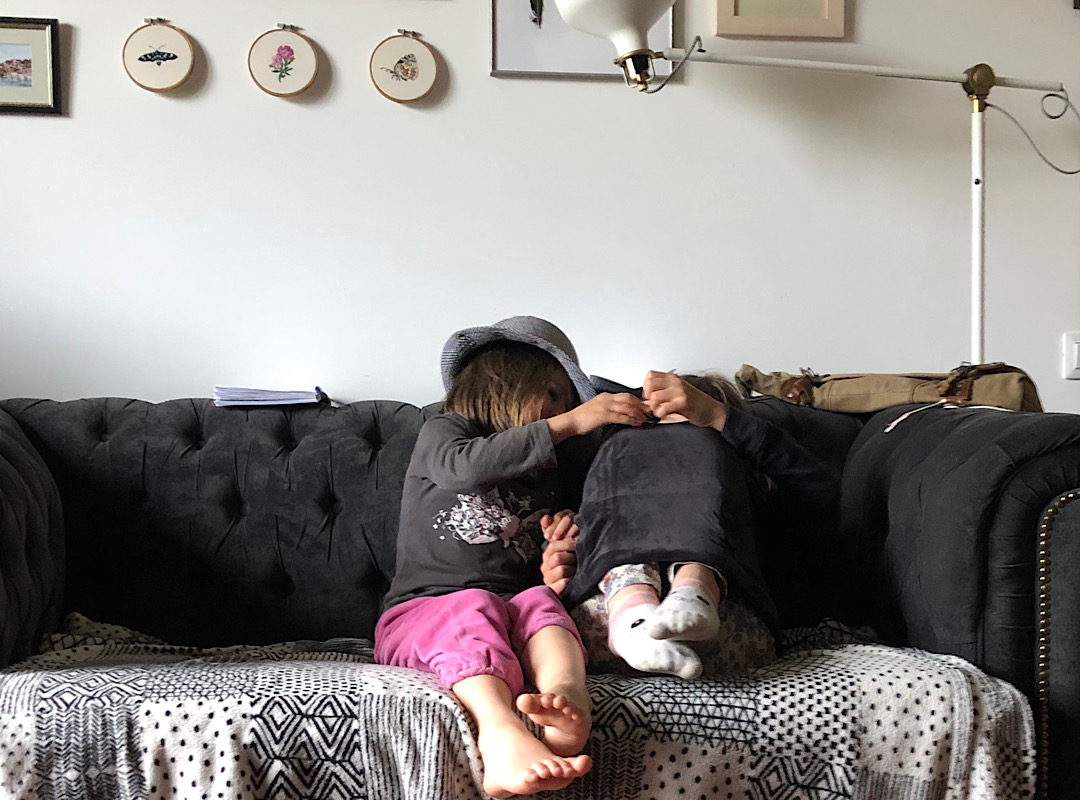 I’m developing a twitch. An eye twitch. The fear of interruption for some inane reason, is real. If the girls go to the bathroom, the moment they return to the room they have to tell me about their experience or confirm they washed their hands or share a thought they had on the pot. I frankly don’t care anymore. If I go to the bathroom they wait at the door to catch me up with the going’s-on during my absence. I frankly don’t care. My mind can’t contain all the nonsense that is thrown at me. Conrad says I listen too well to all their gibberish and calls.

Last night I had two hours of zoom with the rabbi and my friends. The girls wanted snacks. They wanted a movie. Jackie needed help with her homework, everyone was talking. They would sit next to me, and breath. Tap on my shoulder while I was talking. I sent them to conrad a few times. Eventually they both took a sit on the couch in front of me and would roll cars on each other and whisper louder and louder. I sent them in the other room. They came back. They asked for desert. During this time I was trying to have a holy time of Bible immersing. The devil was hard at work with my patience.

Every single week I ask for these two hours without them touching my shoulder or interrupting me. It is absurd that I can’t get two meager hours without their requests or need. I’m very good at setting boundaries. But something is amiss here. Conrad says it will get better once we’ll have an office and make it off limits during calls. I think of that live interview where a 3 year old burst into her dad’s office while he was live. He kept it cool. The mother snuck to retrieve the kid. It was hilarious. But I wonder how often that happened to him. He seemed unfazed. I’m at the point of extreme irritation with the incessant needs, wants, questions, demand for attention. It’s no wonder I can’t put two together together lately for a poem or a blog post.

As I just asked for 5 uninterrupted minutes, Jackie asked me to explain to her a third time her math homework. Dad is one meter away. Available. Ivy dances. Showed me she washed her hands, the progress of eating her apple. She interrupts Jackie but Jackie welcomes the interruptions, though it drags her homework out into the evening.

I’m not angry. I feel like ranting. But I’m staring to lose hope that things will ever change. I reiterated my expectations. I gave them alternatives. They look at me with their mouths agape as if I’m the unreasonable one. Jackie rolls her eyes. Ivy quivers her bottom lip. It’s my life. And I hope that the ground work we do now will pay off later. I need a life. Away from home. Something. The girls started school mid this week. For a month I can start a good routine without them. The house is nearly finished. I know the girls will eventually want their space, and won’t need my attention and approval at every step. Something to dream about, and look forward to.