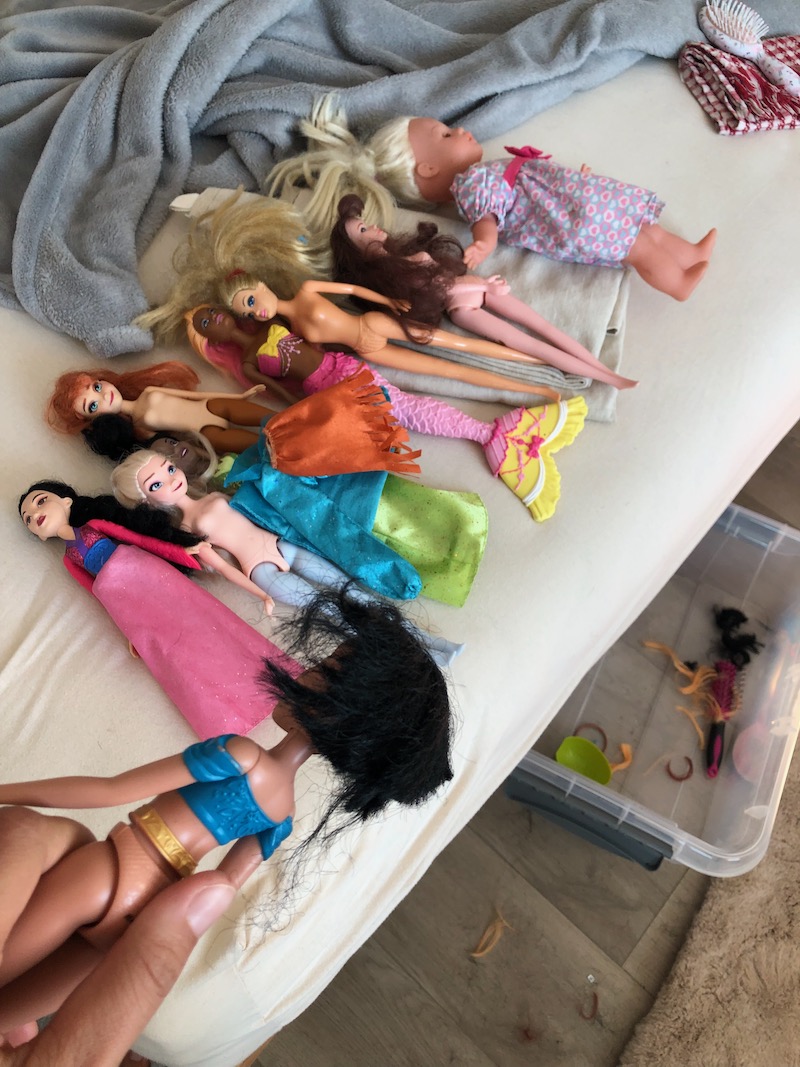 I went in to tidy up the girls room, and saw short black hair on ivy’s bed. I thought in might be Rufus’ and I brushed it off. But as I picked up more stuff, I saw chunks of other type of hair everywhere. And the Disney princesses mixed about the carpet. I thought they trimmed the ends but as it turned out, some princess got bob haircut. Some got funky trims. I looked around and there were Jackie’s school scissors. Ah, the weekend creativity of my girls.

My first thought was that it was Jackie’s doing. While I was in church with Ivy. Conrad suggested I asked the little one first. Sure enough, she admitted it. I did ask point blank but with just curiosity in my voice. And when I asked her why, she said the idea popped into her head when I was resting. She was bored. I told her she needs to apologize to Jackie for cutting some of her doll’s hair and to not do it again.

It has been said before that a good sense of humor is the secret ingredient for a healthy family life.

Conrad seemed more upset than me. Upon further investigation, his concern was about the next crazy thing they might do. I thought it was funny, because I did it too. And for some grace filled reason, I am more detached and relaxed and see the humor in things. Out of a strong desire to do well by them, and maybe prevent future mistakes, we become too stern. Instead, I laughed to myself and maybe put conrad at ease too. Let’s not parent out of fear. This is all too common curiosity practice, and we frankly don’t care so much personal about their dolls’ hair.

It feels as if someone is covering me in parental prayer, and I fly on wings of hope and humor and clarity. Speaking of prayer, in the most infuriating circumstances, when I had to wait 2 hours in front of an office, because the lady at the computer was new and flustered, or other similar situations, instead of fueling my mind with anger, I would pray for the person causing me the delay, the other people waiting in line, and I could feel the mood shift. And not just in me. But around me. How many people we cross paths with daily, and many of them have never been prayed for. The invitation to pray without ceasing is a gift.