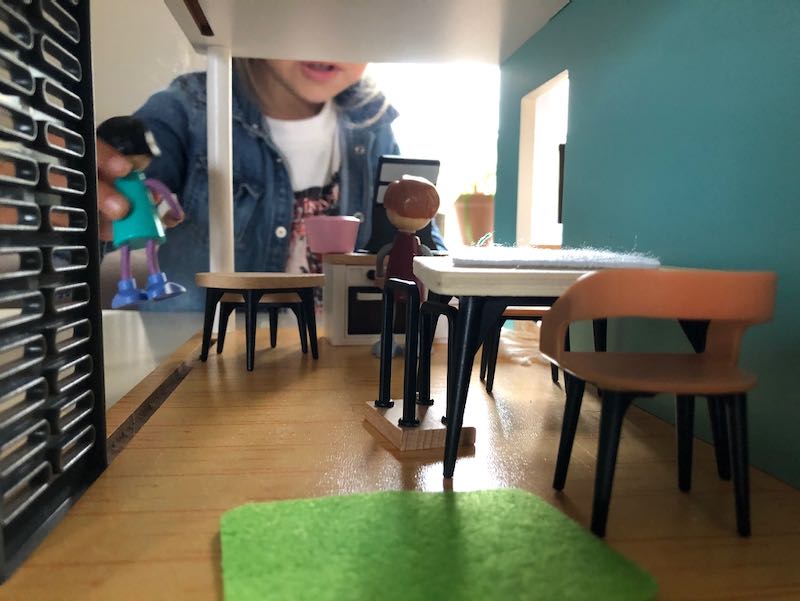 Jaclyn made some poor choices, poor for a 6 year old. No dramatic consequences. Yet. But left unchecked, thing could easily get out of hand. I honestly forget the actual line of events, but as I was talking with Jaclyn, taking charge of the situation and setting her straight, I told her that I’m her mother and I will fight with all my strength for her well being. And if I have to, I will pull her by the hair out of hell. She laughed at the notion. But she got the point. While it’s in my power, I will not sit idle. On the other hand, letting her make some mistakes and learn from them, I’m totally in. I root for independence of spirit, of mind, of actions. But all in good time.

I don’t remember my mother making me do chores. But I was blessed with a wise experienced grandmother. We were bringing up the rear with grandkids. She didn’t ask if I knew how to do this or that, she just just sent me to do stuff. I realized my gaps of knowledge and it was an excellent humbling experience.

At home I started to notice my mom doing things. Washing the Capet. The dishes were eternally pilled up. It was not my mom’s favorite thing to do. My dad did the dishes. And then I started doing them. I never cooked at home. When things were left/ put off, like chopping boiled veggies for the salad, I saw them and did them. Taking the trash out was not assigned. We all took turns. Keeping my room tidy was something that my dad made me aware when it was din disarray. But as I think of my recitations of my girls, I realize I am starting them early compared to my own personal experience coming into my own sense of responsibility.

My parents never put to me to bed a regular times. Mom says it was too much of a responsibility and a chore. She and dad worked in shifts and they life was not orderly from a schedule in point of view. I liked my sleep. And we co-slept and I never felt like I was alone. I asked to sleep by myself very early. Out of too much freedom & companionship, I branched off.

A year and a half ago I clarified our expectations with Jaclyn. What are the three reasons for serious consequences: disobedience, disrespect and lying. After a while we took a break from enforcing it, much like the point system of rewards. But last week I asked Jackie who broke a lego piece in half. Without batting an eye she said “Ivy”. I waited and asked Ivy what happened. It was not a big deal but I wanted to know. Ivy said “Jackie”. And now we had a predicament. Ivy doesn’t lie. Not yet at least. She is a transparent and a clean window. So I went back to Jackie and I asked her what happened. I told her the lego piece has no value to me, but her truthfulness does. I want her to learn the discipline of Truth. To make it a habit.

She did admit she broke it when she tried to take a small piece off. She used slightly too much force. I thanked her for her telling the truth. And I asked her if it was very hard to say it. She smiled a crocked smile. She said not really. But she also knew that nothing would have happened if she had admitted it the first time. We don’t get upset at broken toys. So I wonder why the testing of lying.

She admitted that she sometimes lied and I didn’t catch it.

Today we had a talk about the lies having “short legs”. Or that the truth always comes out. And we are reinstating the rules of the house: respect, listening, truth telling.

All these take responsibility to own. Understanding the value of it.