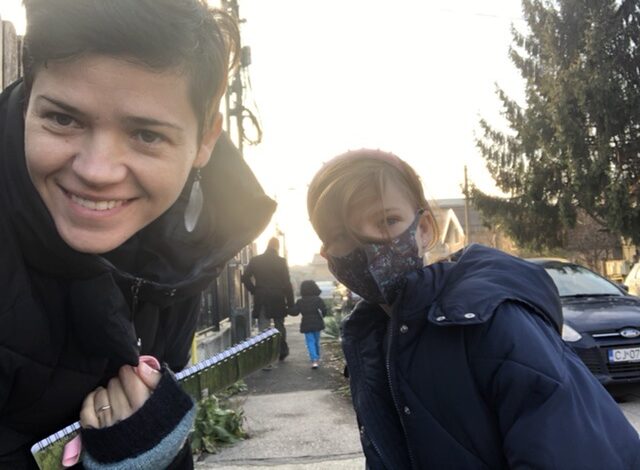 We entered a new stage. I wasn’t oblivious to the temporary peace and understanding we were just experiencing these last two months. Yet change happened overnight.

For example, now, all of a sudden, when we correct Ivy (as usual, at her level, with the same warmth and understanding), or when we say no to her, she sulks. Big time.

Jackie on the other hand talks back (talks over you, talks nonsense or she is downright disrespectful). Isn’t growing up hard?

The challenging part is that she acts out with company. As if she is showing off. J. is otherwise funny and witty, except when she isn’t and makes a fool of herself and us.

Last night I was showing my friends a picture of a new friend, and j. comes over, takes a look and asks loudly: “who is that weirdo?”

Her comment took me by surprise, but I addressed it on the spot. I turned to her and said that comment is offensive to me and to my friend whom she doesn’t even know. And to call someone a weirdo is hurtful. I know she just heard this phrase and is trying to out because it may have sounded funny. But it’s never funny for the one called as such.

Needless to say, Saturday night was challenging, trying, exhausting. She tested us, talked over us, acted all offended that we don’t give her more attention – which is what she craved to begin with. She even wrote me a very expresso letter stating her disapproval of our parenting.

Then, the very next day, after church, I was catching up with a friend on many serious topics. She interrupted us several times in just 5 minutes, impatient to go home. After the third interruption served with attitude, though I acknowledged her and asked for 2 minutes to conclude my conversation, as I turn to my friend and said “so…” she corrected me loudly: “you know you don’t start a sentence with SO.” I told her I was actually drawing a conclusion to the conversation which she just interrupted. She rolled her eyes at me.

My friend, whom I love for her candidness, using the kindest low and loving voice, turned to my daughter and said: “it is not your place to demand your mom to hurry. Also, it is not your place to correct your mom’s grammar in front of her friends, as if you put her beneath you, by talking to her like that.” She rolled her eyes again. I told her we will discuss later at which point she turned around and left.

At home we had words about the incessant interruptions which we made fun of, as a way to cope with the annoyance. But instead of it getting better, it got a lot worse. This self-irony only made it worse. It made room for it while we were trying to figure out a plan. My eldest feels entitled to grown-up conversations and if people don’t pay attention, she says increasingly outrageous things.

Enough is enough. I have had her needs on the forefront of my mind, her validation, connection, attention. But there is a limit, a boundary that has been grossly trampled and I will not have it anymore.

Not long ago j was a very polite little girl. In most company she still is very polite. As a 3-4 y/o she would touch my arm, waiting for me to acknowledge her and then say what she wanted to say. She has a lot of good polite habits that have been shelved for whatever reason to make room for showoff and attitude. My relaxed approach and taking things in stride, letting things slide… they were all the cracks through which bad behavior settled in.

So we are going Cold-Turkey on interruptions and disrespect. It’s a long journey ahead. But we are determined.